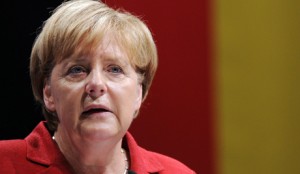 epa02937171 German Chancellor Angela Merkel sits in front of the German national colors as she speaks at a regional conference of the Christian Democrat’s (CDU) state associations of Baden-Wuerttemberg, Rhineland-Palatinate and Saarland at the Schwarzwaldhalle in Karlsruhe,?Germany, 26 September 2011. It is one of six regional conferences to check the atmosphere at the party’s basis prior to the CDU’s national convention in Leipzig in November 2011. EPA/ULI DECK